When the Grizzly entries opened in September I consulted the family squad to see whether they were interested in entering this year’s race. Richard, having finished in 4:02 in 2013 and 4:05 in 2014, was keen to have a crack at the 4 hour barrier and, for reasons not explained, Ceri, a member of last year’s “never again club”, also decided to enter. The most important member of the squad, Granny Carole, said she was willing to mind the grandchildren for the day so entries were duly made. Surprisingly we were all successful in obtaining places again.

With dire warnings of parking problems because of the loss of most of the main car park we decided to set out at 6am to try and ensure we could get a parking spot reasonably near to the start/finish for our mobile changing room (Richard’s van). In my humble opinion breakfast at 5:30am is not an ideal start to a race day. Our strategy worked because we arrived in time to get a spot in the bit of the main car park that remained and were followed in by second claim member Mike Penberthy.

Lining up for the start Ceri, Richard and Mike decided to move up towards the front but I stayed back talking to Hayle members, Nicki, Ian and Sarah, because I knew it would be fatal to my chances of a decent finish if I started too quickly. After a pep talk from the Town Crier we were off at 10:30, although off is a bit of an exaggeration because back where we were we did not move for about 30 seconds. Across the first shingle beach and, after 3 attempts at the race, I have still not worked out the best route; staying high which is shorter or being closer to the shore where it is firmer. I stayed halfway in between so probably had the worst of all worlds.

On the road climb out of Seaton Ian came alongside with his “minder”, Sarah, but he had dropped back again by the top of the climb. We were now on to the easier off road section before hitting the first of the mud. At 4 ½ miles I heard a “good morning Barry” as Mike Mack caught me. I followed him for a while until we came to a very muddy downhill stretch and my Inov8 Mudclaws came into their own (hopefully this plug will get me a discount on the next pair) so I was ahead of him when we reached the beach where the Grizzly splits from the Cub. Resisting the temptation to join the cubs I set off on the second shingle beach section which includes a wade through a river. At the end of the beach you are greeted by the beat of the drums but on shingle it is difficult to keep to their rhythm.

After more mud and climbing in equal measure we reached halfway. I checked my Garmin and it was showing 2:04 which I knew from past experience was no indicator of a 4:08 finish. You soon hear the shrieks coming from the woods and realise the bogs are just around the corner. There is always a photographer stationed here and, having disappointed him in the previous two years, I felt obliged to do a pirouette and sit down right in the middle this year. The climb up from the bog seemed even more slippery than I remember and, if it wasn’t for the rope to pull ourselves up on the left hand side, I think I would still have been there now.

In the later stages of the race you start picking out runners to try and catch to keep you motivated and I decided to try to overtake a Tamar Trotter named Linda. I know her name because for three miles virtually every spectator we passed called out “come on Linda”. It was only when I passed her that I discovered that she was not well known to everyone but had Linda on the front of her running top. Having passed her I could tell she was not far behind because I could still hear the “come on Lindas”. When we reached the last shingle beach section (with the drums still showing the same enthusiasm as two hours earlier) I made the decision to run all the way across and not join all those ahead of me who were walking by halfway across. I could hear from the footsteps that someone was still running behind me and just before the end of the beach Linda came past and reached the ”Stairway to Heaven” ahead of me. This seems to get more vertical every year and I had fallen about 30 metres behind Linda by the top. At this point there is only about 3 ½ miles to go and a quick look at the Garmin indicated that a pb was unlikely. There were no more bogs or mud but several sharp “nips” stop you getting in to any sort of rhythm.

At last we were on the road to Seaton and I knew there were no more climbs to come so, as we hit the 19 mile marker, I decided to try to leave my nemesis behind for the last time and set off on my mission with no looking back. As I reached the seafront I could see the race clock and realised a pb was on after all and I crossed the line in 4:29:24; a minute quicker than last year and 28 minutes better than 2013. My personal battle with Linda, without her actually knowing it, had pushed me on to a new pb.

I had heard people calling my name at the finish and I discovered it had been Ceri and Richard who had finished, been back to the van, changed and returned to the finish before I came in. To be honest I think they would probably have had enough time to eat their lunch before I came in. My own pb looked a bit feeble beside Ceri and Richard’s times which were pb’s by 37 minutes and 39 minutes respectively. Having run the race in near perfect weather we left Seaton half an hour later in a hailstorm and I felt sorry for the late finishers but not as sorry as I would have been if I was one of them.

Carn finishers on the day were: 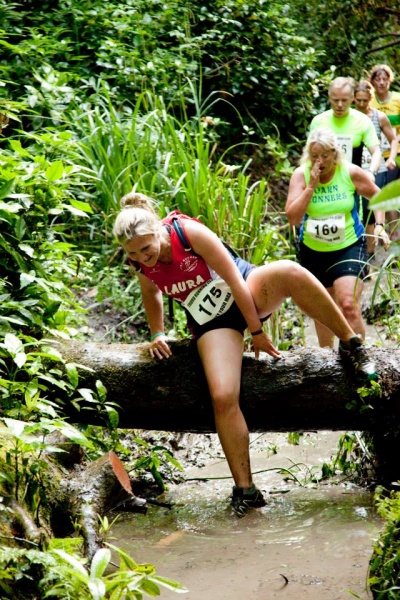