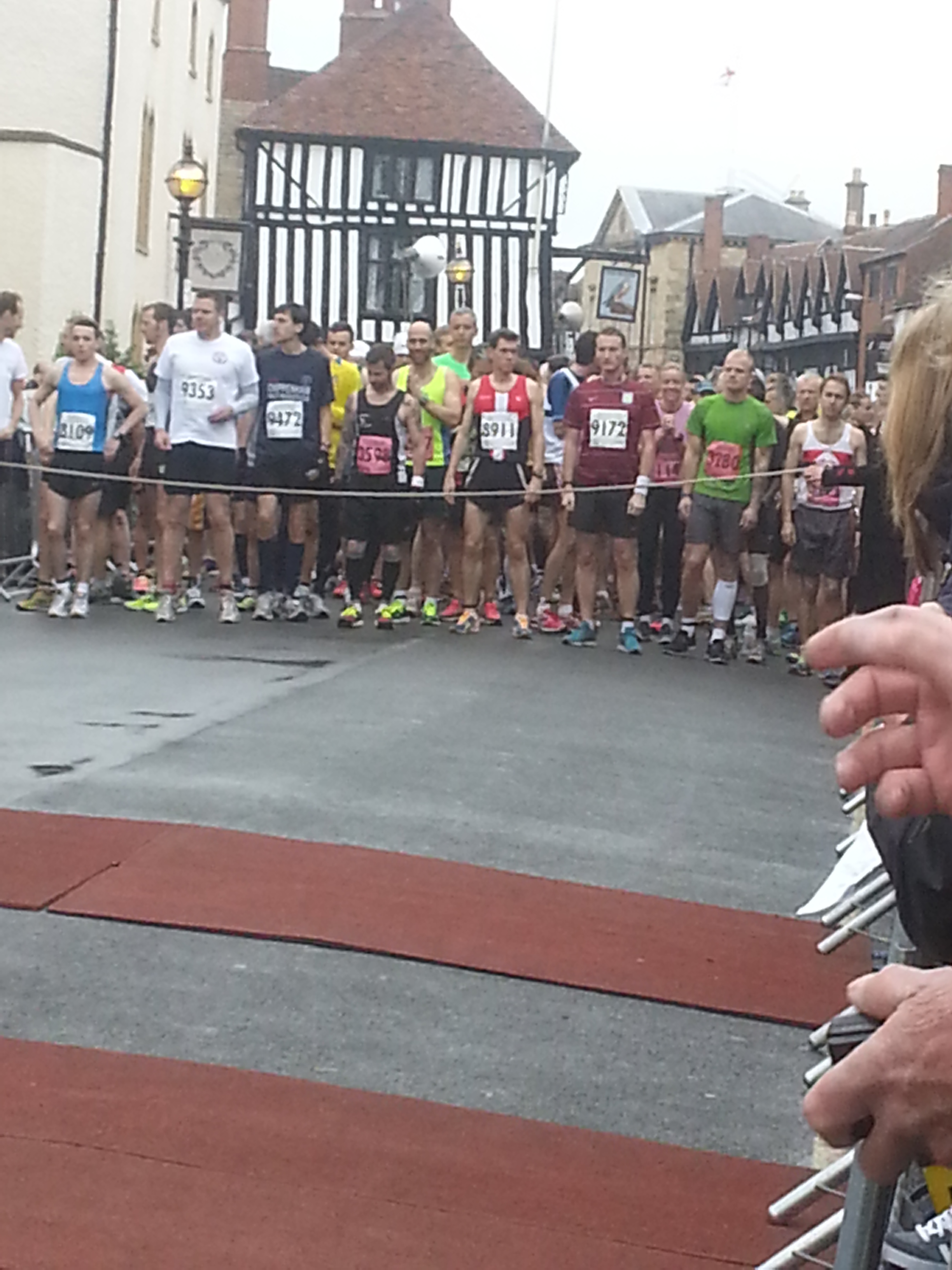 I picked this marathon after missing out on London and the Duchy Marathon not being held this year.  It seemed like a pretty flat race and I hadn’t been to Stratford upon Avon before so why not give it a go.

Training had gone very well getting all new PB’s at Storm and Marazion and had a really good PB at the Surrey Half of 1:23:59 so I was setting my sights on a possible sub 3hour Marathon and at worst hopefully getting a good for age time for London of under 3:05.

So all carbed up and ready for race day the weather was looking kinder than reported and my confidence was reasonably high.

At the start line I saw Dawn who was also running the marathon as well as some Hayle runners and a Newquay Road Runner as well.  I got chatting to an American wearing a Boston Marathon top really nice chap who has just moved to the UK and was running his first Marathon this side of the pond.  He was looking at sub 3 and asked if I minded him tagging along with me.  Knowing that a long race can be lonely I said fine and at the sound of the horn we were off.

The first mile is a lap around the town so friends and family get to see you twice before you head into the country.  I set off a little quicker than I should and had to reign myself in to keep it around 6:45 pace.

Water stations were every two miles and it was all bottled making it nice and easy to take as much or as little as needed on the route. Just after the second station we hit the first small hill and this was much easier than I expected which is always nice.

The miles kept ticking on by and felt very comfortable but I knew there was a big hill at mile 7 (also at 18 as its a 2 lap course) but it also didn’t seem that bad as it was a nice gradual climb and nothing compared to the hills we are used to in Cornwall!  It was a short sharp descent though so you couldn’t enjoy the downhill as much as you would like.

We then came up to a junction were a marshal was turning us left I had seen signs for the Marathon straight on though and didn’t turn which led to a manic marshal shouting to turn round.  Luckily this didn’t cost me too much time (or the American running with me).

The next few miles were pretty straight forward nice straight road pretty flat until we got to mile 10 where we went off road.  This wasn’t too bad as we only had 2 miles of it and there were a few puddles to avoid, luckily it wasn’t too muddy although I was aware that I was having to work harder to keep the pace up as it was softer than the road.

Soon we reached the half way point at 1:29:30 which was pretty much spot on what I wanted and we were now on lap 2.  The first hill came and went and then the second hill which seemed a little harder on the 18th mile than it had before but we were able to keep the pace up.  This time after the descent we were sent straight on (I got it right this time) and we went through a little village before heading off road at mile 20.

This time I was struggling to keep the pace up this section was much muddier than the 2 miles we did on the first lap and in the end I gave up puddle dodging as the edges were very sticky and it felt like my trainers were trying to be sucked off! After 3 miles of this we crossed a road and joined the 2 miles of off road from the first lap this wasn’t as bad and I thought I might be able to increase the pace.  This lasted about half a mile before my legs decided to slow down again!

With 2 miles to go I felt I was hanging on and the American nipped off to the toilet so I was now running on my own except for the odd walking half marathoner also heading for the finish.  The last half mile was on damp grass and zig zagged to the finish line, I saw the 3 hour point go past but by this point I knew I was safely under 3:05 and I managed to put my head down and finish strong with a good crowd cheering us all on as we neared the finish line.

I came 23rd overall and 12th in my age and have got the good for age time for London so well worth the trip! 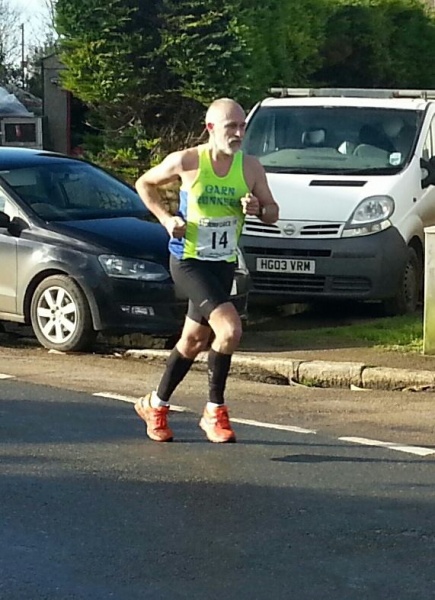