Having run the Grizzly in 2013 for the first time I was keen to do it again (a glutton for punishment). Richard was also keen and Ceri decided to join the family squad.
With the change in the entry system to a ballot there was no guarantee of a place for any of us but I submitted our applications and sat back and waited. When all three of us got places it seemed like good news….. at the time.
With Carole assigned to child minding duties we set off for Seaton on the day at 6.30am and arrived after an uneventful trip just after 9am. Ceri and Richard went off to race HQ while I remained at the van to put in my contact lenses; best to be able to see where you are going when running on the coast path.
Arriving at the start I could not see any of my fellow Carnies but I had a quick chat with ex-Carnie Glynnis and her fellow Hayle runner Nicki. Knowing from last year the severity of the course I decided to set off at a fairly comfortable pace and run my own race rather than being dragged in to keeping up with someone.
On the road climb out of Seaton Mike Mack came alongside but, after a brief exchange of pleasantries, he dropped back and I was on my own again. We were soon off road and passing a succession of signs giving us inspiration for which the Grizzly is famous. We also pass the bagpiper – I think the jury is still out on whether he is inspiring. I knew that my time for last year was 4:57 and my time for the first few miles gave me hope that I was on for a pb but it was early days yet, the real tests were still to come. We soon hit the first of the mud and, despite the fine weather we had had for a few days, the mud seemed even stickier than last year. It does give a certain sadistic pleasure passing people trying to extricate their shoes from the mud.
Several jelly babies later we approached the bogs with the inevitable photographer hoping you would fall in to give him a good shot. I am pleased to say that I avoided this ignominy but more by luck than any skill on my part.
The Grizzly is certainly a race of two halves: the first half is not easy but the second half is on a whole different level and, in the back of my mind, I was aware that the “Stairway to Heaven” was still ahead. I did get into a sort of rhythm after the bogs and, when I arrived at the final shingle beach, I decided to run it rather than join practically everyone else at that stage in walking. After a quick stop at the memorial tree (another quirky Grizzly tradition) it was straight on to the “Stairway to Heaven”. As I approached it I wondered whether it was as steep as my recollection from the last year. I can confirm that it was; the top actually felt vertical. From the top it was only about three miles to the finish and I knew from last year that it was only undulating from that point so I set off with renewed enthusiasm.
I soon saw a Carn vest up ahead, probably two or three minutes in front of me and this spurred me on to greater effort. I was getting closer and closer but, coming through the park above the finish, I realised that my attempt to catch him was in vain. It was not until I had crossed the finishing line (in a time of 4:30) that I discovered that I had been chasing Steve Jones who, having eventually beaten me by less than one minute, was at the finish talking to Mark Wreford. Steve said “never again” but Mark said “everyone says that after the finish but enter again the following year”. We await developments to see if Steve is on the start line next year.
After a quick hose down from the Fire Brigade it was back to the van to see how Ceri and Richard had fared. Richard’s Garmin had failed part way through the race but he thought his time was just over four hours and Ceri had a time of 4:16. Ceri had become a member of the “never again” club and Richard was contemplating membership. I enquired about the other Carn finishers and found that Janna came home in a fantastic time of 3:25, Mark was in at 3:51, Sarah was about 6 minutes ahead of Ceri and James missed the 4 hour barrier by a few seconds.
A quick change and it was back to Helston just in time to play with the grandchildren before their bedtime. The consensus was that it was difficult to say who had had the hardest day, the runners or Granny Carole.
Carn finishers on the day were: 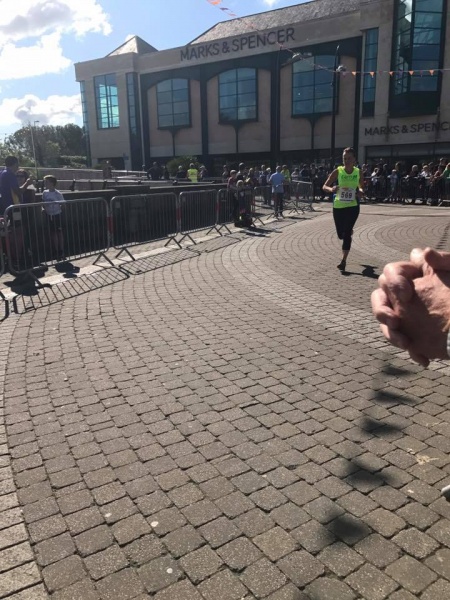