Thinking of joining a running club?

CeriPosted on October 25, 2018 Posted in Uncategorized

I had been considering joining a running club for years, literally. But I always managed to find a million reasons not to. Top of the list is that I’m an introvert and it’s all too scary!

I started running over 10 years ago after randomly deciding I’d sign up for a Race for Life. I was quite terrified and quite terrible. I would trot on the treadmill at my local gym; at first I could run for a whole 2 minutes before it felt like my heart, lungs, or quite possibly both, were about to burst right out of my chest. It seemed that I’d made a horrible mistake in thinking I could do this.

I refused to run outside at first – people would see me! It never occurred to me to join a club.

Weeks and months later, the very first time I ran 5k without stopping felt like one of the most amazing achievements ever. I was hooked.

With hindsight I know that my journey to running this 5k would have been so much easier if I had joined a Couch-to-5k group, to receive the advice, support and encouragement I needed to improve. As it was I made slow progress and was close to giving up lots of times.

Fast Forward a bit and I had continued running, finally abandoning the treadmill and venturing outside. After weeks of deliberating because I felt daunted, I started to run at Parkrun. I had been worrying I’m not good enough / too slow / I’ll be last  –  but I soon realised how inclusive and positive it is; catering for all kinds of runners, joggers and walkers. It’s really a joy on a Saturday morning to scamper out with a group of happy running individuals, rain or shine.

At Penrose and Heartlands Parkruns I had noticed people from Carn Runners, then when I took part in events such as Cubert 5 this year I noticed the vast majority of the other runners were members of a club, all in their club shirts and encouraging eachother along the way. I looked on with envy and decided I really should join a running club; surely I would like being able to meet people with the same interest in running, having people to run with, having a club to belong to.

The introvert in me was a little freaked out and I was put off by the hundreds of questions I had. Like  – but isn’t it just for “proper” runners? How does it work? Is it very competitive? What if no-one talks to me? What if everyone looks at me?! What will I wear, have I got the right clothes? What if I’m too slow? Will they run too far for me?

What did I find out?

You can go for up to 4 weeks as a guest to try it out.

It’s friendly and casual, you can walk in on Wednesday club night and people will be welcoming.

Runners of all abilities attend – some are slow and some are very fast, some are beginners –  some of whom have completed a Couch-to-5k –  some are experienced runners who like to compete in events across the county and further afield. Some are people who just enjoy a run and perhaps do parkrun or other events occasionally.

There’s a chat about any upcoming events and who’s taken part in recent events.

A route is discussed and you go off in groups of people who are likely to run a similar pace; however, no need to worry too much; the group I was in stopped regularly along the way to re-group and ensure everyone was still all together – no-one would be left behind (quite a relief as I don’t know the area and was nervous of getting lost!).

People are friendly and chatty.

It’s not at all judgemental; there is support, encouragement, understanding, fun.

Oh, and there was cake afterwards.

I seriously can’t believe I didn’t join a running club before now.

If you like running, whether you are a beginner or experienced, slow or fast, joining Carn Runners is great way to meet new people and to enjoy or progress your running in a local, supportive, friendly and inclusive environment. I wholeheartedly recommend it! 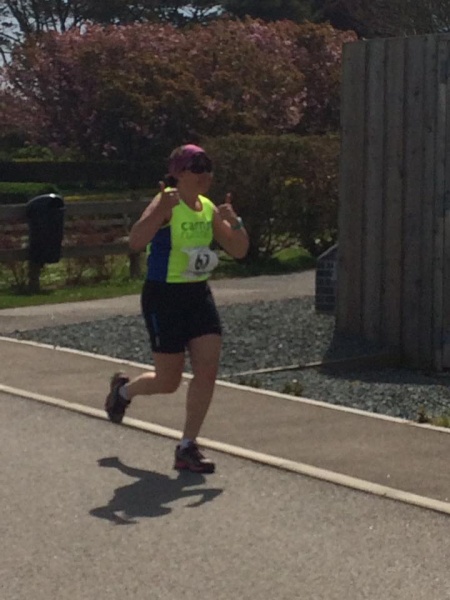