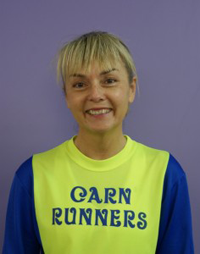 Thank you all for coming to the Carn Runners AGM.

Tonight you will hear reports from the committee on the achievements, finances and activities of the club this year.

Your Committee works hard behind the scenes to ensure the smooth running of the club.  We meet every 6 weeks throughout the year. As Chairwoman, I have also attended the quarterly committee meetings of the Cornwall Road Running Group which gives a countywide perspective of the running scene. Later in this meeting we will be looking for Officers and committee members for the coming year. I hope some of you will take this opportunity to volunteer and influence how the club is run and bring your ideas as to how we can continue to improve.

Carn Runners is a vibrant and growing club. Since the last AGM the membership has grown in number from 102 to 114 including 8 x 2nd claim members, made up of 72 ladies and 42 men.

Our GP race in January, Storm Force 10 was a great success. We had a record number of finishers, 555 in total. The weather was kind to us and the feedback we had was that everyone who took part enjoyed the course and the facilities at the school which are excellent.

We made a profit of over £1900.00 from the race. This profit enables us to keep our annual fees very low for the benefit of all our members.

Donations for our legendary refreshments totalled over £600.00 in aid of Bowel Cancer SW.

As well as generating capital for the club it is also the first race of the season and sets a high standard for other GP races to follow. Barry Drew was Race Director this year with Caz shadowing him in readiness to take over from him for next years’ race.

Barry and the members of his sub-committee did a great job in organising the race. Thanks must also go to the Carnies, their family members and others who gave their time to set up the hall, marshal the course, help with the car parking, setting out the signage, manning the baggage storage and the water stations and the baking and serving of the refreshments. The club would be unable to stage the race without you all.

If you wish to run Storm Force next January we would ask you to either help before or after the race or ask family or friends if they would marshal or help in some other capacity on the day.

Our current subs are £22.00 per year, of which £12.00 goes to UK Athletics. The remaining £10.00 allows us to offer members a club run on Wednesday nights, dune running on a Friday and runs in Tehidy Woods on a Monday during the summer. We also arrange circuits at Pool School and coached track sessions at Carn Brea during the winter at a subsidised rate. A run from Flora Motors, Helston on a Monday night has been taking place this year also. Tea and cakes are also provided by our master bakers after our Wednesday night club runs. We all look forward to those, I’m sure.

There has been a lot of enthusiasm this year for the 10 race Multi Terrain Race series which ended with Boconnoc in June. This has been reflected in the club’s performance. Carn had 10 age category prize-winners in the final results, including Janna who won 1st prize in the Female Under 35 category. She also won 1st prize in the Open Ladies category. A fantastic achievement for Janna. Both our Men’s and Ladies Teams finished in 2nd place overall which is a great result for the club.

We have been fielding record numbers of runners in both the GP and MTRS this year. In some races nearly half our members have been out showing the vest and representing the club. In the GP series Carn was placed 5th this year in the “Club Entries per Race” table which is a great improvement on last year’s 9th place.

Both our ladies and men’s teams have taken their places on the podium this year. It is very gratifying for the club to be recognised as we are consistently punch above our weight and more than hold our own against much larger clubs.  I have heard other club runners say how well Carn has done this year and our standings in the GP and MTRS tables certainly reflect this.

I think it’s fair to say that this has been a great year for Carn, particularly for our lady runners.

Many of our new members have taken part in their first ever race this year which is quite an achievement. We have also had members taking part in their first ever Half Marathons, Marathons and multi-terrain races. Plenty of Personal Bests have been recorded this year and several of our runners have finished a marathon with times that have gained them a Good for Age place in the London Marathon, which is no mean feat.

Our members have also been undertaking ultra runs this year. In the Classic Quarter which is a 44 mile coastal race, Gary Richards came in 3rd overall. Janna Eyre completed the AofA which is a coastal race of 100 miles. We also had runners taking part in the RAT runs of between 11 and 64 miles, with Jason Richards and Sarah Clemence completing all 64 miles. Janna Eyre and Laura Millward completed the Atlantic Coastal Challenge which is 3 marathons in 3 days from St Merryn to Lands End.  Laura and Sarah Phillips also completed the Lakeland 50 miler.

Thousands of pounds have been raised by Carnies this year with their sponsored runs. Among the charities to benefit have been Penhaligon’s Friends, the Cornwall Air Ambulance, Alzheimer’s UK and Bowel Cancer charities.

Our members have also been racing out of county and showing the vest in places such as London, Bideford, Manchester, North Tyneside, Brighton and Stratford to name but a few!

We have enjoyed several social events this year and the summer away runs in St Agnes, Helston and Porthleven proved very popular.

As well as circuits during the winter months, Barrie Cardew has also organised the well supported dune runs throughout the summer. Despite what Barrie maintains I’m still not sure that running (or in my case, scrabbling),  up those steep dunes can be considered enjoyable but the spectacular views at the top make the effort worthwhile and, as Barrie always says when we get there, “All this for free”!

Barry Drew has put a lot of time and effort into the “Show the Best” results. I am sure we have all been interested to see where we stand in the rankings and to compare them with our previous year’s results.

Craig and Janna have been the Men and Ladies Captains this year. They have continued The Team Challenge which was introduced by Olivia last year.  We have all enjoyed taking part in the challenges and now eagerly wait to see which team has won – yellow or blue? Craig has made some race videos this year which we have enjoyed watching. His video of the Cornish Marathon really captured the emotion of the day.

We have looked forward to their Sunday emails which have been very informative, allowing us to catch up with the week’s news and results. I’m sure we all agree that they have done a brilliant job.

Our club is made up of runners with a wide range of ages, abilities and aspirations. Whether you run for the social side of things, to get fit or to compete in races, our aim is to make sure that all our members feel valued and appreciated and enjoy running as Carnies.

I would also like to mention the wonderful Carnie Army of supporters who have been out in force at races this year. To hear their shouts of support and encouragement means a lot. On a personal level, I would like to highlight a couple of races where their support went above and beyond. It was awful weather at Trelissick 10k and some of us finished while running in a cloud burst and thunder storm but there was still a rousing welcome at the finish line. Also, the fantastic support we had during the Cornish Marathon this month. Again the weather was bad but we still had a brilliant send off, supporters cycling the route and encouraging us, others waiting in the wind and rain at Jamaica Inn for us to arrive, others turning up in different places along the route or waiting many hours in the rain at the finish line to see each and every Carnie safely home. Our supporters must be the loudest and best in Cornwall! One runner told us after the race she thought Carn Runners were a smashing bunch of people. You can’t get better praise than that can you?

Looking forward, 2016 is Carn Runners 25th Anniversary year. Your committee is working on some special events, some surprises and limited edition items of kit which will only be available in 2016.

The first of these special events to be unveiled is a club away run in Palma, Majorca, which will take place on 16th October 2016. If you would like the opportunity of a few days away in good company and a choice of running either a 10k, Half Marathon or a Marathon in the winter sunshine please see Margaret afterwards and she can tell you all about it. A deposit of £50pp is needed by the end of December to secure your place. Friends and family welcome.

As Chairwoman, I have been very proud to represent Carn this year. I would like to acknowledge the splendid work done by our Officers, Caz as Secretary, Ceri as Membership Secretary, Judy as Kit Captain and, of course,  every other member of the committee who contribute their time and effort for the benefit of the club.  In particular, a big thank you from us all for everything they have done for Carn goes to Barrie Cardew as Vice Chair and Jeanette Toy as Treasurer who are both stepping down this year.

I am hanging up my whistle and little pink notebook but would like to wish my successor, the committee and our runners all the very best for the forthcoming year.

I hope the club’s 25th anniversary year proves to be a very successful one for you all. 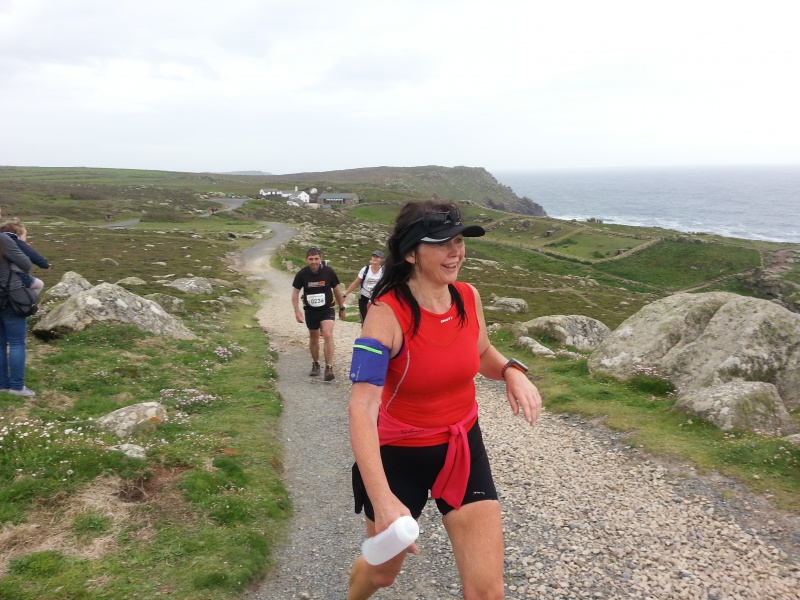